The other night I was routinely doing a clean out of my BlackBerry Bold via the DeskTop Manager, removing a couple of applications that I no longer required, and loading one that I wanted to use again (you see some applications run hot and cold with me, and others, like Socialscope, Viigo, Google Maps, Wicked App and Tumblr, I never tire of).

The process seemed to go well, but I realised something must have gone awry when my Bold got stuck in a never ceasing reboot cycle...not a pleasant sight to behold...and this was at 9pm, on a week night.

So jumped straight into trusty google and conducted a search, as this has never happened to me with any of my previous 3 BlackBerry devices, and I really didn't know what to do.

Hmmm, this was going to take a while going through the search results. Hang on, it must be coming into the morning for the UK and Europe, so hunting through twitter, I wanted to find a couple of good experienced BlackBerry friends (thank goodness I follow as many BlackBerry users on twitter as I can) who may be able to assist, and sure enough Fabian (@FabianMH) and Rob (@evilbladeUK) had come online.

Trying a hard start (full battery pull for half an hour) didn't cut the mustard, but Fabian had quickly found the relevant links to both JL Commander (a Windows program to nuke your BlackBerry) and what to do with a continually cycling/rebooting BlackBerry, while Rob promptly found me instructions on how to push through the replacement OS via Windows DOS commands.

Now Fabian and Rob are very busy guys on twitter and elsewhere, but I was still able to get advice and encouragement staggered from both of them, which was just like having one person on call, just for you.

So then the process started at approximately 11pm that night, sitting in an office by myself, frustrated and bewildered, but with the comfort of knowing both Fabian and Rob not too far away (even though they were on the other side of the world)...the value of twitter being a real time communication and networking tool.

I came to a grinding halt with entering of the DOS commands, until I remembered something, an extra move required...on a Vista laptop, don't forget to right click and "run as administrator"...I lost half an hour, and almost lost what hair I have left.

It was a great sense of relief when the OS was pushed through to my crippled BlackBerry via Windows and not the DeskTop Manager, and then the Bold came to life...that in itself was a wait that seemed to last an eternity.

Yes I lost everything: data, contacts, 3rd party applications, settings...BUT I did something one day earlier which saved me a lot of time. Let me explain...

Nan Palmero (@NanPalmero) posted a blog about how to back up specific data etc via your DeskTop Manager, over and above what you would normally do with the standard automated back up...and I paid attention. More to the point, I acted on his suggestions. So I was able to retrieve I would suggest about 95% of what I lost.

Rob gave me one further piece of excellent information...a link to the BlackBerry Messenger 5.0 which I could not seem to locate.

So at 1am I headed to the apartment with a functional BlackBerry, SocialScope, Viigo and BlackBerry Messenger 5.0 added.

No dinner that night, but amazing lessons learnt. A big heartfelt thank you to Fabian, Rob and Nan...if you are a BlackBerry user and are on twitter...friend these three.

Now to pay it forward... If anyone wants more information as to the steps I used, the links that came in handy etc, let me know. I have learnt, and now in a position to share the love.

Posted by Thomas Skennerton at 3:12 AM No comments:

Paying it forward with a BlackBerry... it happened to me

Rushing around last Saturday morning, I did not have a chance to go through my regular RSS feeds received onto my BlackBerry Bold via the Viigo application, so had no idea what had happened... someone had leaked / released BlackBerry Messenger 5.0 to the wider market, apparently in beta format.

So what you might say, and fair enough, and I understand your lack of interest here if you are not a BlackBerry user. If however, on the other hand, you are, BlackBerry Messenger 5.0 is quite simply quite exciting (compared to the existing ones in use, virtually unchanged for it seems, ages):

So, here I was, a BlackBerry user (or abuser) who is normally on top of applications that are released / leaked, not knowing this amazing update had surfaced.

Mark obviously thought enough of our friendship to bring this amazing piece of BlackBerry software to my attention.... in other words, he paid it forward.

I was then able to install BlackBerry Messenger 5.0 and start playing, but more importantly, was able to help others with the same .... I was able to pay it forward, as a direct result of Mark's paying it forward action.

If you get the chance, I would encourage you, no matter how small or insignificant it may seem, to pay it forward. 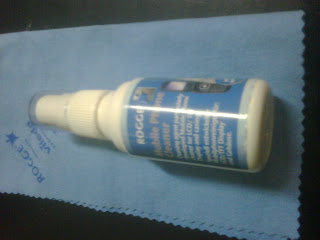 A while ago I found my BlackBerry Bold's trackball starting to become quite unresponsive when scrolling down (all other actions were normal).

A few of my fellow CrackBerry users suggested replacing the trackball, canned air & one suggested a phone cleaning spray.

I can say I didn't want to operate on my Bold, so tried the canned air, which after a number of goes, did succeed in restoring full functionality to my Bold's trackball.

But maintaining/servicing the trackball... this is where the phone cleaning spray has come into its own. For approximately $20AUD I purchased the spray, which came complete with a polishing cloth.

Do your own research first, but I find spraying/misting the front of my Bold, and then immediately polishing the spray off with the cloth, at least once a week, keeps not only the face of my BlackBerry really clean & shiny, but I am certain, ensures the trackball continues to perform its required functions.

Maintenance which doesn't take much time, nor cost a lot.

Give it a try, especially if your trackball is unresponsive.

I talk (tweet?) to a diverse range of people on twitter, something I am really proud of. No two of my twitter friends are the same, which is just brilliant for me, as one of my initial main reasons for signing up to twitter in the first place, was to simply learn from people... something I am pleased to say, happens many times every single day.

As you may well know, I use a hashtag quite a bit, and that one is #payingitforward and i have explained my views on paying it forward and how I try to pay it forward in this blog.

One morning, I was DM'd on twitter by a gentleman in the United States with a proposal that he thought I may be interested in, and let's be honest here, how many of these are simply "not my cup of tea" (I am sure you know what I mean)? Anyway, as is the case of the majority of these, I read them, check out any links and have a think. Yes or no, good or bad, interesting or not, they were the decisions to be made.

This one caught my eye... he was looking for a way to promote/introduce Australian artists in America, and whilst I didn't have a clue as to how to do this, or even where I would start, I immediately thought of one avenue....

You see, I know people within a government department whose job it is is to promote the export of Australian goods/services/talent to overseas markets. Perfect!

So I asked him to forward me a quick outline to my gmail account & I passed it onto my contacts.... paid it forward.

That was a couple of weeks ago, and today got notification that yes the government department would love to assist and contact was made.

Regardless of the outcome, I know from within myself, I have paid it forward.

So as I sit here and type away (on a keyboard that is way bigger than my BlackBerry Bold's qwerty keyboard), I feel a nice warm glow descend over me.... i have made a difference to someone else, and it literally cost me about 30 minutes of my time.

So, if ever you get the chance, go on, try paying it forward.

TferThomas
Posted by Thomas Skennerton at 1:54 AM No comments: